I forgot to mention a connection between my last two blogs–one about Emily and Erlo and the other in which I try to notice some of the global connections in a small one block radius of Mi Oficina Computer Café I often go for meetings or to do other work.

The most concrete connection is this.  The bakery at Mi Oficina made the Tres Leches cake that we served at Emily and Erlo’s Wedding Reception in Oakland California.  And it was delicious!  I am posting pictures of the cake here so you can admire it.  But you can also see it on Mi Oficina’s Facebook page, or if you have a meeting with me at Mi Oficina, you will notice the picture of my daughter’s cake cycles up every few minutes on their digital displays of their products. 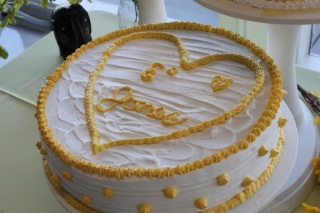 We decided on this cake the day that Emily and Erlo took us to Korean BBQ Plus, right across the street from Mi Oficina. It gets great reviews, and it did not disappoint.  Emily and Erlo were able to introduce us to some of their favorite Korean dishes.  When we were done, we walked out of a Korean space, across a California street and into a very Latino space at Mi Oficina.    I was amazed to see how the next generation of my family felt at home in both spaces.

Before I get off the topic of connections, I think it is interesting that Mi Oficina is both active and passive in its facilitation of connections.

Regarding the active facilitation of connections this linked article recalls how someone at Mi Oficina was able to help Juan connect through chat with his mother whom he had not seen for a year.   Whenever I go there, I see how the computers they have set up there are used by their clients to connected with family and friends, many of whom presumably are somewhere in Latin America.  Those connections cross borders between nation-states, the conflicts around some of which are in the news nearly daily.

But the passive connections are interesting to watch, too.  I see friends reconnect there.  Meetings take place that bring people together with common political, social, and business interests and usually the language of the connection is Spanish, and it is over a cup of coffee.  I believe that it is without entirely realizing it, but Mi Oficina facilitates passively some interesting connections between Christians of different persuasions.  Since it is not their own place, Christians there are free to focus on following Christ.  It is not a place to promote their own programs and ministries, though there is a bulletin board and a literature table where religious and non-religious alike promote their wares.  What I especially have liked to notice has been when Catholics and Evangelicals meet each other there in the space between the tables where they have their own meetings.   Often the introductions don’t need to identify each other according to party lines.  They can talk instead about serving the community.  Some do their service in secular agencies, motivated by the love of Christ, others are part of specific movements or organizations.  It is cool is to watch them notice each other and eventually meet and share stories.  I expect that the next step might be that they will make plans together.