Reflections on my way back from Southern Africa.

While I was in Zambia, I visited the village of Mantanyani with Johanna Rohde, a long-time friend of our daughter Emily who is working there with Peace Corps.  I was struck with the gentle leadership of the village provided by Elliot the Headman, who appears here with his wife Silvia. 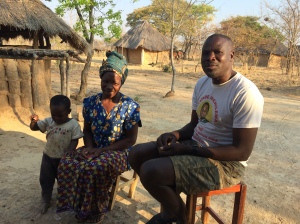 His job and heartfelt commitment is the well-being of the people of his village.

Johanna and I took a side trip to Victoria Falls and the Zambezi River, where I was struck by the huge contrast between the everyday live of Mantanyani compared to the very European/American tourist life around Victoria Falls. 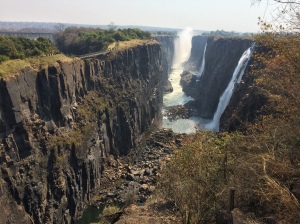 It is easy o see here how Colonialism has enduring effects on the the lives of people even though the legal formations of the colonial empire have been removed.

In my visit to Zambia and Victoria Falls, I witnessed first-hand how the enduring power of colonialism continues to define the relation of people to other people, and to keep us Northern Europeans in positions of power (and being waited upon). I felt ashamed that I have not worked harder for justice. What will it take to make it possible for the world to be enriched by the contributions of people and their languages that have been pushed to the margins? Their marginalization is colored by those who have claimed to be at the center or by those who, like me, are located in a “center” we were born into. Our experiences of the world are supported by others who were born at the “margins” as defined by that center.

Victoria Falls appears more like a site in European History, than as a location in African geography. It’s full of white people enjoying the Falls and the stories about Livingstone and the colonial period, while being served by Zambians who cannot afford to enjoy the place.

I am hoping someday humanity will find a way to communicate with each other that will reflect better the languages in which humans know and serve the King of all the earth. Meanwhile we seem to be stuck using the language of the colonialists. Here I am writing in English.