The cover of Atlantic Magazine this month asks if America can put itself back together again. Convoluted thinker that I am, I wondered where this “again” came from and where (or who) some people want to take America “back” from (of course some of us know that it is on the brink).

When was America “together” in the first place?  If there was a time when this country was not on the brink, your ancestors may have missed it.  Some of mine were in “the home country” until the Gold Rush, and others didn’t come until the 20th Century.  On the other hand, maybe some of yours were already here.  That’s possible if you are from an old California or Texas family with a Spanish last name family, but then maybe “America” was about to invade them.

The rhetoric of the last few years is unable to identify a golden age in which someone was not exploited, or someone’s freedom was denied or worse.  I don’t think the victims of those earlier ages really want to go back.

An examination of racist practices in the past provides a useful lens.  If you are not one of the groups mistreated, you might be happy to go back to the ways life worked when the world was organized by the exclusions in these pictures.  But if your ancestors are singled out in these pictures you are probably not interested in going back to those times. It would be more than uncomfortable!

I think the people who want to “go back” or who think of “putting it back tog
ether” confuse history with the ideals that someone thought up, or fought for, in the past.
Or maybe the good world that those ideals aimed for never existed.  When America has been great is when people have fought for the ideal–something we believe about humanity:  that all people are created equal. 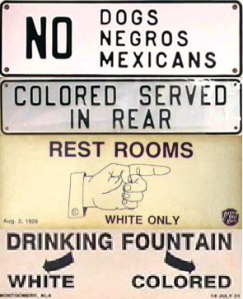 America has lived important moments in which previous generations have fought inequalities, exploitation, exclusion and other evils that are inconsistent with what we think we should be.

Our greatness is not found in the past.  It shows itself in the ability to go through conflicts and polemic to face our failures to live up to our ideals.  America’s greatness has been found in the moments of honest assessment, of recognitions of what needs to change, and of costly efforts to change it.

Such moments have to come again and again.  Has America ever put “itself” together? 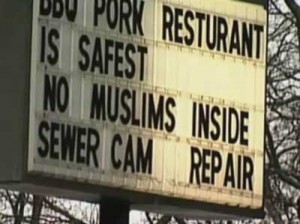 Most often immigrants (and their children) have owned this struggle as their own.   Today unprecedented numbers of immigrants are betting on the future of this country and voting with their feet and sweat of their work  even when they cannot vote in the polling booth.  They want to live up to the vision.    If, by  chance, some of them think America is “on the brink” (as you and I “know” it is), they have been working hard to bring it back from that brink.  More important they work hard so that their children and grandchildren (and ours) can live in a great America in the future.

May God bless all of us together.