My main responsibility, after trying to be a loving husband, father, and grandfather, is to help coordinate the people in Martureo who are creating a Brazilian Center for Missiological Reflection

I have copied here for you the report from our Martureo site about some of our accomplishments in 2017.  In Martureo we understand how important it is for Brazilian mission practitioners to carefully consider how they give witness to Christ and participate in his mission in all spheres of society.  And I am very pleased with what we were able to accomplish.
https://www.martureo.com.br/martureo-some-accomplishments-from-2017/

During 2017,  while God continued to work on us,  he also allowed us to participate in His Mission.  With the support of people like you, we worked hard to support Brazilian mission practitioners and help them think carefully about the job that they do.

Here are some of the ways we got to participate:

We translated and published, Whose Promised Land?: The Continuing Crisis Over Israel and Palestine by Colin Chapman.  Our partnership with a Christian publisher (Ultimato) and a major seminary (Servo de Cristo in São Paulo) provided the platform for these efforts to make good missiology available in Portuguese.

We helped at Vocare 2017 April 21-23 in Maringá.  Vocare is an initiative by new generation Brazilian mission leaders, blessed and supported by AMTB—the Brazilian Cross-cultural Missions Association—to lead young people like themselves into engagement with the world in light of the gospel.  The Martureo team (Katsue Takeda, Felipe Fulanetto, Tiago Gomides, Timothy Halls and Adriana Degaspari) participated actively, built connections and gave talks.

We published articles on www.martureo.com.br for leaders to think together about mission and for mission training programs all over the country.

Some of the articles we published this year include:

Visit our page to read all articles published by Martureo www.martureo.com.br/artigo

In partnership with the Servant of Christ Seminary, Marcos Amado taught in three programs. www.martureo.com.br/cursos/

We also spoke at Sepal 2017 National Pastors’ Conference.
At the 43th Sepal Pastors Conference in May workshops focused on the theme: Simple Church: Rediscovering the Mission.  Marcos Amado spoke on Mission among Muslims: facing the challenge of Islamic terrorism. Felipe Fulanetto, Publications Coordinator,  gave a talk on A Simple Church for a Simple Mission: engaging the new generation in the challenges of the world.

Consultation: training Brazilians for service in the Muslim World.

On the eve of the triennial Brazilian Congress on Missions (CBM) in October 2017, representatives from 18 agencies that send or train Brazilian mission workers to the Muslim World met for a consultation in Aguas de Lindóia/SP. From 21 to 23 October 2017, we listened carefully to each other to understand better the various ways in which Brazilian evangelicals serve Christ among Muslims.

A working group was established to carry out specific projects to develop a training curriculum.  These two initiatives will prepare Brazilians to serve in the Muslim World and give testimony among Muslims.

The Consultation was an initiative of AMTB (the Brazilian TransCultural Missions Association) and organized by Sepal, MEAB and Martureo. Above: Marcos Amado discusses realities, challenges and opportunities for the gospel in the Muslim World. Above: Mila Gomides leading seminar participants in prayer for Buddhists. 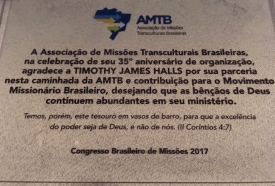 Above: The founding of AMTB 35 years ago was celebrated as part of the CBM. Martureo Executive Coordinator Timothy Halls was the treasurer of the original Board of AMTB.

AMTB 2017 Report on the Brazilian missions’ force: who, how many, and how do we work? 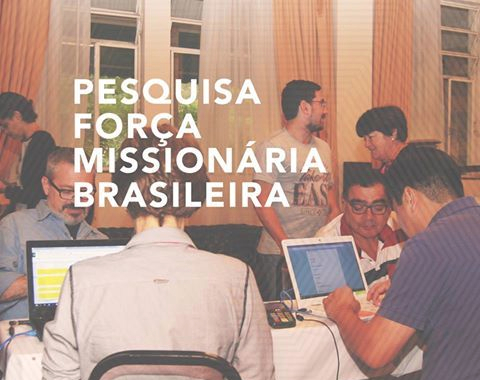 A report on the status of the Brazilian Missions Movement was released at CBM.   The announcement that 15,000 Brazilians have been sent to live and proclaim the gospel in cross-cultural situations around the world, was a cause for gratitude.   Brazilian missionaries serve in nearly every country of the globe. The report also sheds important light on the many Brazilian agencies that have emerged to support the sending and training process.

F elipe Fulanetto, who takes responsibility for the publication of articles on the Martureo website, was instrumental in the entire research process, from survey to release. He played a significant role in the compilation and analysis of the survey data. W e are grateful to God that he has seen fit to use Brazilians to share the gospel of Christ world-wide. And Martureo is grateful to have Felipe on our team. Felipe asks for wisdom and resources to carry this project forward.

The survey report and analysis are available in Portuguese at pesquisasamtb.org.br

Brazilians commemorated the 500th anniversary of the Reformation in October this year.

The scope and spread of Protestant Christianity during first 500 years of the Protestant Reformation is stunning, as portrayed in this infographic.

The Portuguese version of the infographic was published by Martureo in cooperation with the Center for Global Christian Studies in Boston. 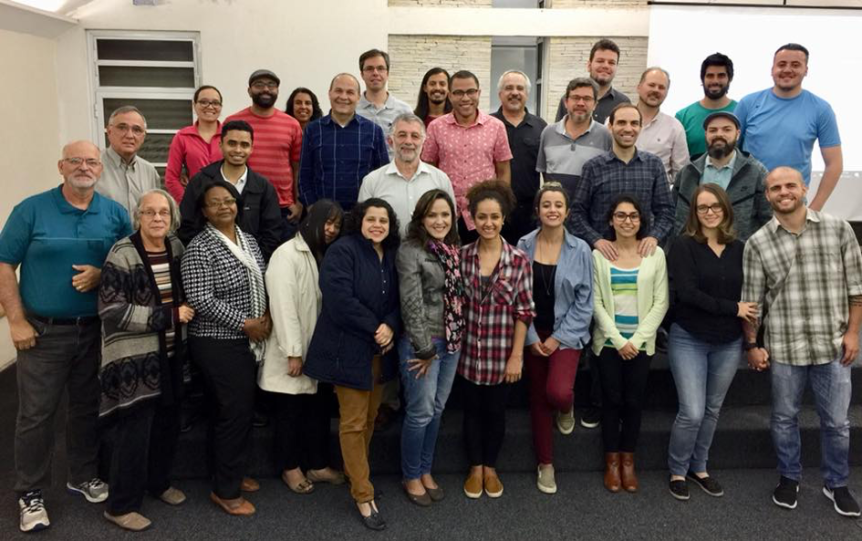 Servo de Cristo Theological Seminary in São Paulo, in association with Martureo, has launched a graduate program in Missiology. Students can choose from among various courses of study that are designed to give pastors, missionaries and missiologists the tools they will need to reflect critically as they face challenges of following Christ into His mission.

The above group is from Module II on Islam, this last October with Dr. Chawkat Moucarry. He came to São Paulo to deliver a week long comparative study on the teachings in the Quran and in the Bible about God, Jesus, forgiveness, salvation, mercy, and other themes.

Learn more about the courses on our website. https://www.martureo.com.br/cursos/

An invitation to participate

The resources you contribute are used to prepare missionaries and missiologists, to translate and publish books and articles, and to organize consultations among missionary leaders.

The Center for Missiological Reflection began in 2014.  At that time, the Lord blessed us with resources generously donated by Brazilians. Because of their generosity, Martureo’s our contribution to the Brazilian missionary movement began.

When you contribute now, your participation makes a difference because missionaries, and those who send them, are being given opportunities to learn and share lessons that will lead to greater effectiveness and longevity in their fields of service.

Please join us in our service to the Brazilian Missions Movement!

We are immensely grateful to share in God’s mission and would like to ask you to pray with us, and for our ability to:

Please visit our website.  If you read Portuguese, you can learn more about what Martureo does.